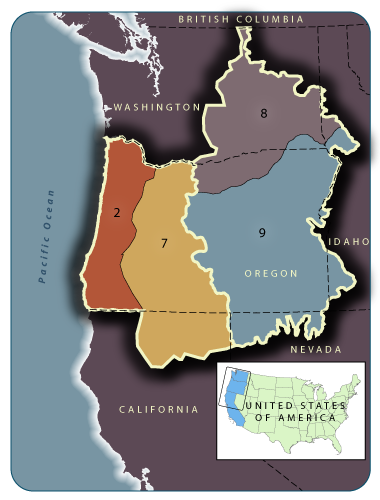 The LEMMA team and collaborators mapped Ecological Systems across all of Oregon and parts of adjacent Washington, Idaho, Nevada, and California. This was done as two separate but related projects: for mapzones 8 and 9, and for mapzones 2 and 7. The two projects are briefly described below. Detailed descriptions of our methods and results are available in the final reports to USGS GAP for these projects. The official, final versions of mapped land cover (Ecological Systems) for GAP are available from the Northwest Gap Analysis Program website. On this website, we provide more background information about the projects and some publications and reports related to our work.

A terrestrial ecological system is defined as a group of plant community types that tend to co-occur within landscapes with similar ecological processes, substrates, and/or environmental gradients. A given terrestrial ecological system will typically manifest itself in a landscape at intermediate geographic scales of 10s to 1,000s of hectares and persist for 50 or more years. Ecological processes include natural disturbances such as fire and flooding. Substrates may include a variety of soil surface and bedrock features, such as shallow soils, alkaline parent materials, sandy/gravelling soils, or peatlands. Finally, environmental gradients include local climates, hydrologically defined patterns in coastal zones, arid grassland or desert areas, or montane, alpine or subalpine zones. To download the list of ecological systems as a zipped Microsoft Excel file, click here. For detailed descriptions of the ecological systems, please see our final reports or use NatureServe's Ecological System Explorer tool.

As part of the NWGAP, a land cover map was generated for USGS mapzones 8 and 9, covering most of eastern Washington, eastern Oregon, and parts of western Idaho and northern Nevada. The goal of the project was to develop a land cover map and database for the area that included as much information as possible on the status of the vegetation and habitats, building from available information but applying some new techniques. The map was derived from two primary components: SAGEMAP and SWGAP for nonforest areas, and GNN for forested areas. The nonforest component was combined from two large regional datasets: SAGEMAP covering eastern Oregon and Washington and southern Idaho, based on the 2000-2001 MLRC Landsat imagery, and SWGAP covering the northern Nevada part of Map Zone 9. SAGEMAP and SWGAP used regionally consistent geospatial data (Landsat ETM+ imagery and DEM derivatives), similar field data collection protocols, a standardized land cover legend, and a common modeling approach (decision tree classifier). We used GNN to map species composition for forests and some woodlands, based on the network of forest vegetation plots in the region. The nonforest and forest components were integrated to create the final maps.

As part of the NWGAP, a land cover map was generated for USGS mapzones 2 and 7, covering western and central Oregon and part of northeastern California. Spatial modeling of Ecological Systems was done by ecoregion within the study area using a multi-step process. First, we built two Random Forest (RF) models, one for forested Ecological Systems and one for nonforested Ecological Systems. (Random Forest models are an extension of classification and regression trees, integrating information from a large set of trees, each of which is built from a random subset of plot and explanatory variables.) We then applied a variety of ancillary spatial data to map those Ecological Systems that we could not model well. Ancillary data sources varied across ecoregions, according to data availability and quality.

All of our maps are served through the Northwest GAP Analysis Program website. Please download the Ecological Systems maps through this site.